After pounding the busy streets of Seville or competing with fellow tourists for Alhambra tickets in Granada, you might find yourself wondering if the Andalusian dream of long, lazy lunches and sleepy, sun-soaked terraces exists at all. That is until you arrive in Córdoba, the second-largest “Old Town” in Europe and home to some of the sultriest street corners in Spain. 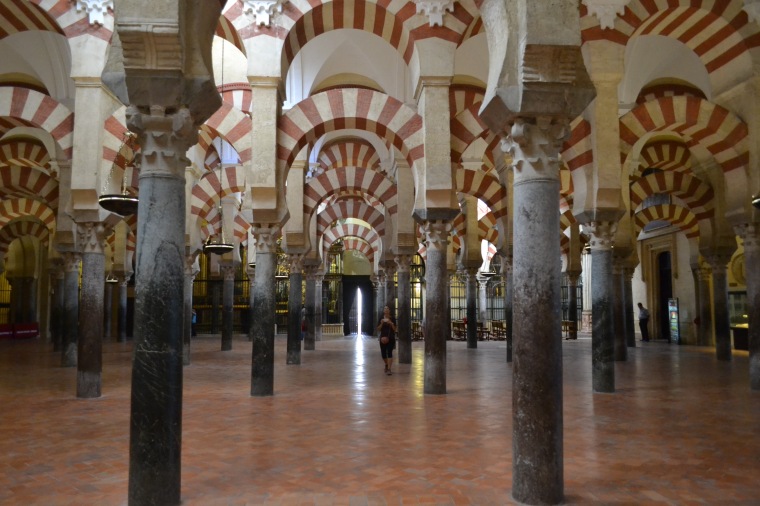 We arrived in Córdoba after three days of scaling Granadian Hills and all the blisters and aching feet that go with it. The city seems confusing from the outside, as is perhaps fitting of a city originally founded by Romans in the 206 BC and subsequently invaded and settled by the Moors, eventually becoming the capital of the Moorish caliphate Al-Andalus in 766 AD. Under the Moors, the city flourished financially and culturally and was considered one of the most important cities in the Mediterranean world. The city’s crown jewel and main attraction, the Mezquita de Córdoba, dates from this period. 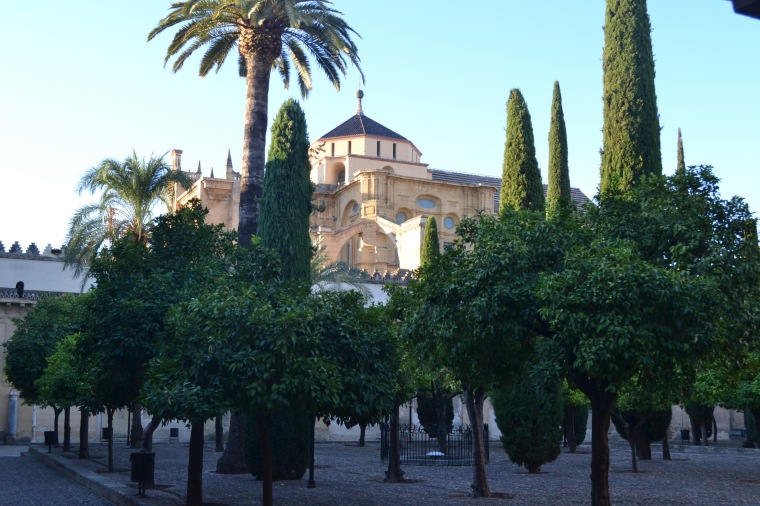 Our stop for two nights, Hotel Mezquita, was located a stone’s throw away from the Mosque and in the centre of Córdoba ’s old Jewish quarter. While the rooms are basic (but very clean), we were amused by the quirky and eccentric mix of English and Spanish antiques throughout. A delicious continental breakfast was served in the traditional Andalusian courtyard and while the hotel seemed slightly gloomy to start with, we were quickly grateful for any respite from the harsh August sunshine.

We got up early to explore the Mezquita, hoping to beat the crowds and get some good pictures in the morning light. Despite being officially called a “Mosque”, the Mezquita is more formally known as the Córdoba Cathedral and is still a functioning Roman Catholic place of worship. As a result, opening times do vary so make sure you check before you head out – in summer (between March and October) it is opened from 8:30-9:30 am and 10:00-19:00 from Monday to Saturday and 15:00-19:00 on Sundays. The best news is that the Mezquita is free for tourists between March and October (otherwise €10/€5). 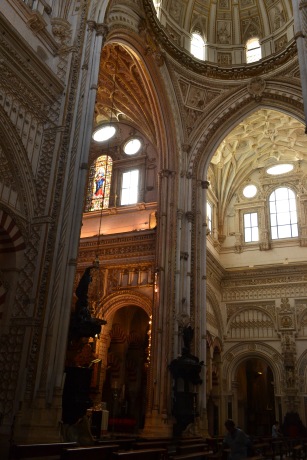 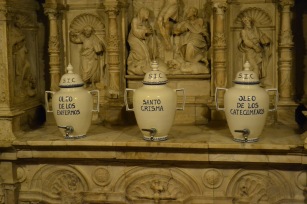 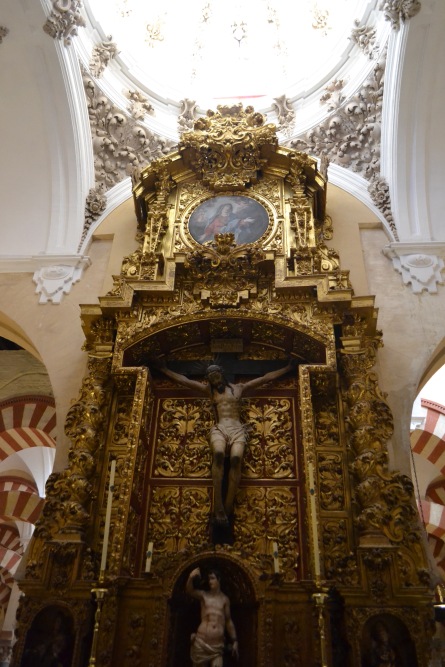 The interior of the mosque is truly astonishing and unlike any other mosque I have seen. Unlike, its contemporaries in Damascus and Jerusalem (Dome on the Rock), the Mezquita was designed as a simple, democratic space echoing the traditional Islamic prayer space of desert or home. The space is horizontal in shape and dominated by a hypostyle main hall held up by hundreds of columns of marble, onyx, jasper and granite. Throughout, you can see the recognisable red and white double arches, modelled on those found in the Dome on the Rock in Jerusalem. At the south end of the hall, is the magnificent mihrab (prayer niche), which is potentially the most beautiful part of the mosque. Illuminated by 1600kg of gold mosaic cubes sent by the Emperor of Byzantium, Nicephoras II Phocas, the mihrab is framed by golden flower motifs and qur’anic inscriptions. Inside the mihrab, a single block of white marble has been crafted into the shape of a scallop shell that forms the dome and amplifies the voice of the imam. 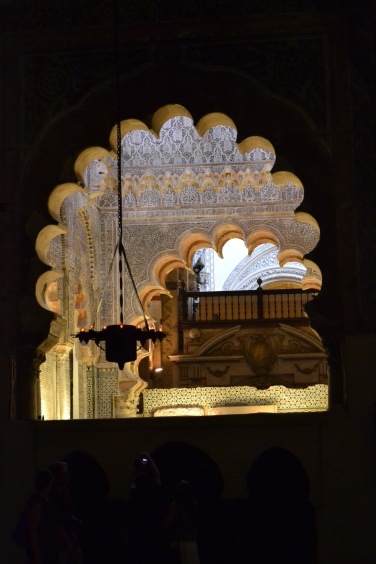 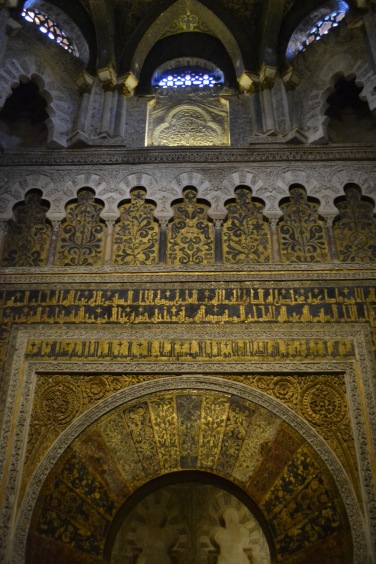 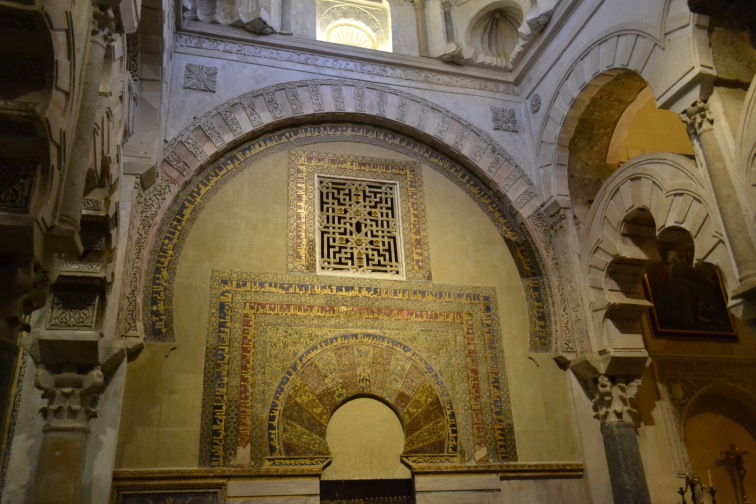 If you have time after your visit, take a few minutes to wander around the Patio de los Naranjos, the picturesque courtyard that frames the entrance to the Mezquita. It’s full of orange, cypress and palm trees as well as gurgling fountains that add an air of serenity to any morning visit. This is the site where ritual ablution (washing oneself) was done before entering the Mezquita for prayers. You can also enter the imposing 54-metre bell tower from the courtyard via the Puerta del Pérdon, a fine 14th-century example of Mudéjar architecture. The tower was originally built to be the Mezquita’s minaret but was subsequently strengthened and made taller by Christians in the 16th and 17th centuries. 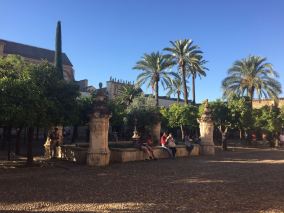 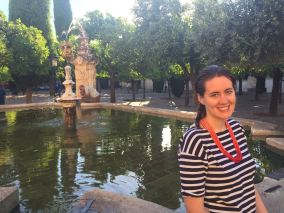 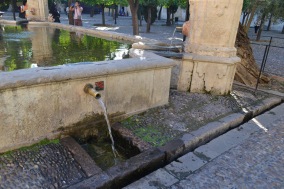 Afterwards, head to Córdoba’s Plaza de las Tendillas for breakfast to people watch and enjoy the 1920s vibe. Stop in any café (we tried a couple and they are all excellent) and if you’re feeling brave, go for the crushed tomato on bread (Pan con Tomate) with a generous glug of olive oil and a pinch of sea salt – delicious! 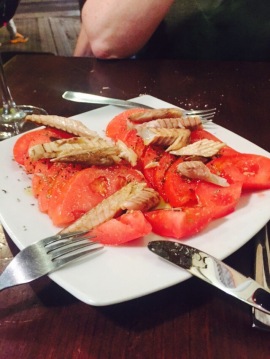 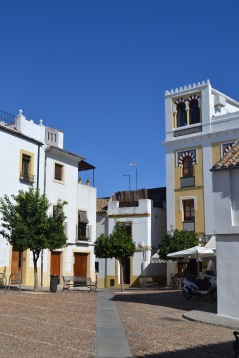 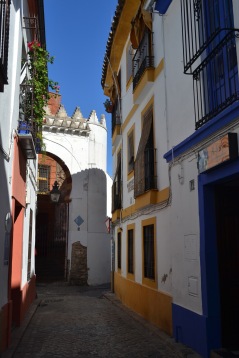